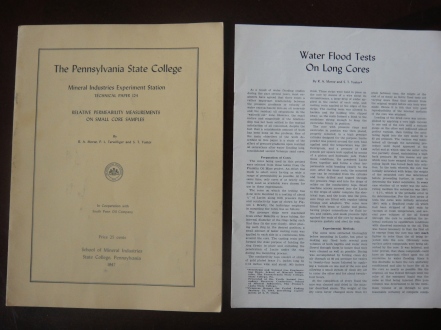 My grandfathers both worked in the oil business, so my parents were very much in favor of petroleum as the way of the future. My father went to Oklahoma University and Penn State to study petroleum engineering. He later got his PHD at Texas A&M in computers (industrial engineering). He was a big deal in the oil business before and after his professional career.  After serving as president of the World Petroleum Congress in the 60’s he went on a lecture tour he referred to as the extinguished (distinguished) lecture circuit.  He was speculative and relied too much on his own beliefs when investing.  This worked out well for them in the glory days of petroleum. They rode the wave of high dividends and capital gains.  Their investments did very well.

At the end of his life my dad was seriously demented as well as invested in some wild speculative oil fields in Texas and New Mexico.  I had always considered my parents’ finances to be a private matter, but I started to be concerned that they could be left broke as a result of my father’s wildcat mentality.  Indeed, when I discovered how far he had gone into these non liquid investments I saw they could brake the bank any day.  The first thing I tried was to legally sell all my father’s holdings in these oil fields for $10 to my erstwhile husband, who had persuaded my dad to go deeper into this stuff.  When he refused to buy them I knew there was big trouble.  I actually left the unmentionable one when I discovered how awful my parents position was in terms of risk.  He was willing to financially abuse my parents, which was not a huge surprise, but it was the very last surprise I was willing to have.  I went about getting my parents’ assets in trust, which required that my father own the oil folly on his own so none of us could inherit it.  It was a legal hassle and expense, but it was accomplished.  The week before my father died his lawyer had convinced the partners in Texas to let him off the legal hook.  They signed documents to free him, and he instantly died.  The documents had not yet been recorded in Texas when he expired.  The drama was heavy, but the ending was the best I could have desired.  My mom still had plenty of money to live and none of us had an obligation to spend big, risk everything in the oil business. Whew!!

My mom had a happy and easy end to her life.  She died at home on Jan. 4, 2008.  On that day oil hit $100 a barrel.  We figured this was the sign for which she had waited because my parents had always wanted $100 oil.  They believed that the price might fluctuate, but it would always go up, no matter what.  They invested their lives, careers, and life savings into the big petroleum idea.  We just celebrated my mother’s death day, and noticed that on Jan 4, 2015 oil had reached $50 a barrel.  During the last 7 years the US has developed the ability to produce oil at around $50 a barrel.  It costs the Saudis around $12 to produce a barrel.  All price wars are intended to eliminate competition for the market.  The Saudis say they can go $30 if they feel like it, and the whole world will have to follow.  The benefits of this global price war go chiefly to the Chinese government.  Hold back on those selfies with the low gas prices.  There are consequences not yet discovered, and they are not all good.

Thank you for sharing this story. People betraying people they should not betray over money is hard for me to comprehend even though I know I am a miserable sinner myself. Also, when I do see it, I am almost always stunned by how easy it seems for them to override their conscience and go on like nothing ever happened.

We came to Fort Worth about between 1840 and 1872. Thus, we were associated with the so called “ranch” or “cattle” crowd. The “oil” crowd started coming around 1917. Soon their numbers rose to about 5,000, most all with money and influence.

Many are in denial but ever since then there has been conflict between the 2 groups. I know about that conflict from what I perceive as bitter experience. But I concede only God really knows.

Sometimes, when I was young, I found myself thinking that things would have been better for me if I had been born in the “oil” crowd.

Then, years later, in a twist of irony, I learned that I was. Not that it makes any practical difference. I have received nothing. If anything remains my guess is it is held out of sight by extended family.

Anyway here is a rough version of what I found.

My great-grandmother was Octavia Bennett (nee Hendricks). One of her sisters was May Swayne (nee Hendricks). On October 1, 1874, Miss May Hendricks married John Felix Swayne. John Felix Swayne had studied for 2 years at Washington and Lee University in Virginia under the Presidency of Robert E. Lee. In 1872 he located in Fort Worth and became a law partner of Captain Joe Terrell. He was the first City Secretary of Fort Worth. He was elected Clerk of Tarrant County in 1880 and thrice re-elected thereafter. He left office in 1888 to pursue Real Estate, Cattle and to the knowledge of the few, “oil”.
John Felix Swayne led a quiet life passing away on November 25, 1941. His wife, May Hendricks, preceded him in death and died on July 13, 1940.
John Felix Swayne had a brother, James W. Swayne, a judge, a legislator and a Democratic Party Official, who was born in Lexington, Tennessee, in 1855. He was educated at the Kentucky Military Institute and Lebanon Law School. In 1878 he moved to Fort Worth. He represented Tarrant County in the House 1891-1892 and served in the Senate 1892-1894. He was appointed as a State District Judge in Tarrant County, Texas, in 1909 and served through 1916. More importantly, he was the partner to James Stephen Hogg, the then governor of Texas, in the what has been called the “Hogg-Swayne Syndicate” for Spindletop, a salt dome oil field located in the southern portion of Beaumont, Texas, spending 4 years on the coast to oversee their holdings. The Syndicate also had one of the most closely drilled leases under the East Texas Field. Their holdings became part of Texaco. Many people consider James W. Swayne to be the founder of Texaco. I read a book some time ago while wandering around the libraries of Fort Worth that said the Hogg-Swayne Syndicate lease in the East Texas Field was in the “heart of the field”, and that they had “the best position under the field.” My family often seemed to suggest that they had a special relationship with Texaco but no mention of the Hogg-Swayne Syndicate or Spindletop or the East Texas Field was ever made or even suggested.
I learned about the Hogg-Swayne Syndicate by chance while poking around books in our local library years ago.
Shortly after my discovery concerning the Swayne Brothers, and their oil dealings, I attended a church gathering in Houston. At the initial gathering, in a large church room, I noticed an elderly, handsome gentleman making his way towards me from across the room. He came right up to me, and told me that he knew Jim Hogg very well when they were young, and that Jim Hogg did not have any money before Spindletop came in. Then he shook my hand and left. I was too stunned to get his name. Jim Hogg did have political connections. I do not know whether or not the Hendricks Family bought into the Hogg-Swayne Syndicate. But I can remember being in a restaurant in Fort Worth many years ago and noticing what looked like an interesting framed article on the wall from a distance depicting the oil rigs at Spindletop at the turn of the century. I went over to it, and, as I recall, it contained some text material which talked about John Swayne and James Swayne, and, their oil dealings, comparing them to John and James from the Bible. I remember thinking at the time that the Swayne Brothers might not have been comfortable with that comparison. I asked my father about the matter. He was an M.D. and was known to have a quick wit. He said the Swaynes “were kind of like a religion around here.” Dad refused to elaborate. He was kidding I am sure. You would have had to have known my father! After his oil efforts, James W. Swayne returned to Fort Worth and served as Judge of the 17th District Court for many years. Judge Swayne died in Fort Worth in 1929. There was a book published in 1993, as I recall, entitled Oil Legends Of Fort Worth. Look at page 19.

I love this story Cousin Rick. My grandfathers were not so fancy in the business…Ernie Morse was a driller before the rotary bit, around the turn of the 20th century..and George Taylor rode a black horse around the Texaco field in Humble Texas and read the meters.

The Swaynes were really just “front men”. The owners of the Syndicate have never been revealed. Most people here have never heard of the Swaynes. The office of James Swayne has been preserved but it is located in an off beat part of Fort Worth. He and his office are never mentioned and really unknown even to people interested in Fort Worth history. James Swayne had one daughter. She made her debut here but never married and taught all of her life at a college in Colorado. I do not recall John and May having any children.

of the 3 men only Governor Hogg display signs of having oil wealth.

That’s a wow story Pam ! I think it’s interesting on the specific details of your father and mother’s passing Good thing you stepped in. HARD but good. Great personal history.