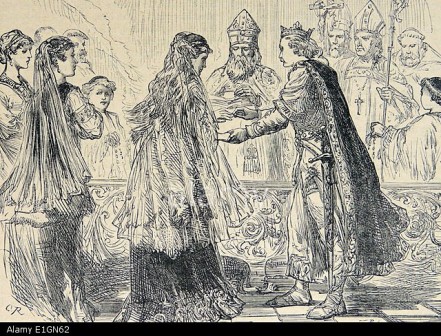 My 27th great-grandmother was Princess of Alba/Albany. She was christened Edith, but adopted the name Matilda upon her marriage to Henry.  It was thought the Norman barons might not respect a queen with a Saxon name.
The marriage to Henry represented the union of Norman & Saxon royal lines.
She was crowned Queen Consort 11/14 Nov 1100 at Westminster Abbey.
Henry married Matilda (daughter of Margaret) to appease his Saxon subjects.  She is interred at Westminster Abbey, London, England (or Winchester).

Christened Edith, but adopted the name Matilda upon her marriage to Henry I. It was thought the Norman barons might not respect a queen with aSaxon name. The marriage to Henry represented the union of the Norman &Saxon royal lines. She is also known by the diminutive of that name – Maud (which had been the name of Henry’s mother). She was the sister of Edgar, King of Scotland 1098-1107.

Edith – Margaret (Matilda) of Scotland, born in 1080 and died in 1118, married Henry I. Beauclerc, King of England, son of William I The Conqueror (ruler from 1066 to 1087) and his wife, Matilda of Flanders,who died in 1083… Matilda was educated at Wilton and Romsey Abbey where she said that her aunt, Christina, forced her to wear a black veil. She threw it on the ground whenever left alone, in spite of beatings. When her mother died she came to England to Edgar Atheling, her uncle. She was a sister of King David of Scotland; she was a correspondent of Anselm and Hildebert, Bishop of Le Mans, who wrote poetry about her. She was asymbol of the union of Saxon and Norman. She was Henry’s Queen for seventeen years and six months, and died in her prime like most of herfamily. Henry and Matilda had a son and a daughter.

Matilda of Scotland (born Edith; c. 1080 – 1 May 1118) was the first wife and queen consort of Henry I of England. Matilda was born around 1080 in Dunfermline, the daughter of Malcolm III of Scotland and Saint Margaret. She was christened Edith, and Robert Curthose stood as godfather at her christening. Queen Matilda was also present at the font and may have been her godmother.When she was about six years old, Matilda (or Edith as she was then probably still called) and her sister Mary were sent to Romsey, where their aunt Cristina was abbess. During her stay at Romsey and Wilton, the Scottish princess was much sought-after as a bride; refusing proposals from William de Warenne, 2nd Earl of Surrey, and Alan Rufus, Lord of Richmond. Hermann of Tournai even claims that William II Rufus considered marrying her.She had left the monastery by 1093, when Anselm, Archbishop of Canterbury, wrote to the Bishop of Salisbury ordering that the daughter of the king of Scotland be returned to the monastery that she had left. After the death of William II Rufus in August 1100, his brother, Henry, soon seized the royal treasury and crown. His next task was to marry and Henry’s choice was Matilda. Because Matilda had spent most of her life in a convent, there was some controversy over whether she was a nun and thus ineligible for marriage. Henry sought permission for the marriage from Archbishop Anselm of Canterbury, who returned to England in September 1100 after a long exile. Professing himself unwilling to decide so weighty a matter on his own, Anselm called a council of bishops in order to determine the legality of the proposed marriage. Matilda testified that she had never taken holy vows, insisting that her parents had sent her and her sister to England for educational purposes, and her aunt Cristina had veiled her to protect her “from the lust of the Normans.” Matilda claimed she had pulled the veil off and stamped on it, and her aunt beat and scolded her for it. The council concluded that Matilda was not a nun, never had been and her parents had not intended that she become one, giving their permission for the marriage. Matilda and Henry seem to have known one another for some time before their marriage — William of Malmesbury states that Henry had “long been attached” to her, and Orderic Vitalis says that Henry had “long adored” Edith’s character.Her mother was the sister of Edgar the Ætheling, proclaimed but uncrowned King of England after Harold, and through her, Matilda was descended from Edmund Ironside and thus from the ancient royal family of Wessex, which in the 10th century, became the royal family of a united England. This was very important as Henry wanted to make himself more popular with the English people and Matilda represented the old English dynasty. In their children, the Norman and English dynasties would be united. Another benefit was that England and Scotland became politically closer; three of her brothers became kings of Scotland and were unusually friendly to England during this period.After Matilda and Henry were married on 11 November 1100 at Westminster Abbey by Archbishop Anselm of Canterbury, she was crowned as “Matilda”, a fashionable Norman name. She gave birth to a daughter, Matilda, in February 1102, and a son, William, in November 1103.As queen, she maintained her court primarily at Westminster, but accompanied her husband on his travels around England, and, circa 1106–1107, probably visited Normandy with him. She also served in a vice-regal capacity when Henry was away. Her court was filled with musicians and poets; she commissioned a monk, probably Thurgot, to write a biography of her mother, Saint Margaret. She was an active queen and, like her mother, was renowned for her devotion to religion and the poor. William of Malmesbury describes her as attending church barefoot at Lent, and washing the feet and kissing the hands of the sick. She also administered extensive dower properties and was known as a patron of the arts, especially music.After Matilda died on 1 May 1118 at Westminster Palace, she was buried at Westminster Abbey. The death of her only adult son and Henry’s failure to produce a legitimate son from his second marriage led to the succession crisis of The Anarchy.After her death, she was remembered by her subjects as “Matilda the Good Queen” and “Matilda of Blessed Memory”, and for a time sainthood was sought for her, though she was never canonized.Matilda and Henry had four children:
Matilda of England (c. February 1102 – 10 September 1167), Holy Roman Empress, Countess consort of Anjou, called Lady of the English
William Adelin, (5 August 1103 – 25 November 1120), sometimes called Duke of Normandy, who married Matilda (d.1154), daughter of Fulk V, Count of Anjou.
Euphemia, died young.
Richard, died young.
She is known to have been given the name “Edith” (the Old English Eadgyth, meaning “Fortune-Battle”) at birth, and was baptized under that name. She is known to have been crowned under a name favored by the Normans, “Matilda” (from the Germanic Mahthilda, meaning “Might-Battle”), and was referred to as such throughout her husband’s reign. It is unclear, however, when her name was changed, or why. Accordingly, her later name is used in this article. Historians generally refer to her as “Matilda of Scotland”; in popular usage, she is referred to equally as “Matilda” or “Edith”. References
Chibnall, Marjorie. The Empress Matilda: Queen Consort, Queen Mother, and Lady of the English, 1992
Hollister, Warren C. Henry I, 2001
Parsons, John Carmi. Medieval Mothering, 1996
Parsons, John Carmi. Medieval Queenship, 1997
Huneycutt, Lois L. “Matilda of Scotland: A Study in Medieval Queenship”.” 2004.

Did you know when you started genealogy how many royal and notable people were in your family tree?

I started in 2008, after both of my parents had died. I have found many notables…both my parents descend from William the Conqueror, and most came to America in the 1600’s. The history fascinates me. I have found plenty of errors, but I learn from that too.

I love history. Somehow our progression in society is geared towards ummmmmmm anything but progression. go Sabres.