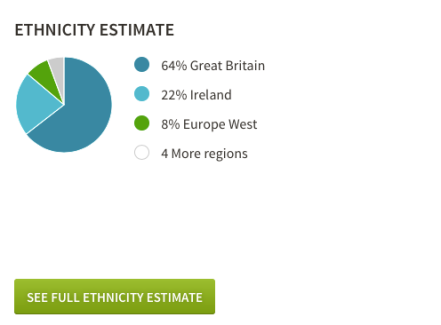 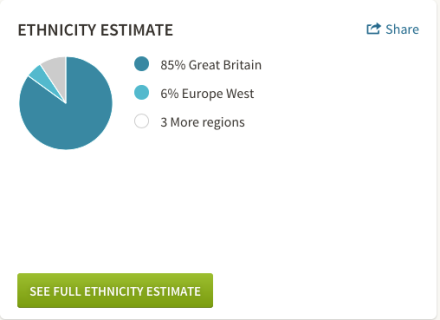 The subject of DNA testing has become more and more popular since Ancestry.com directed some television programming at discovering the ethnicity of celebrities.  Many folks are surprised to learn their DNA reveals a different or much more complex ethnic background than they had assumed.  It is particularly poignant for black people to trace their ancestors back to slavery and find out how much non-African DNA they have.  The show and the advertising have increased the number of people sending samples to the database at Ancestry.com. This has the effect of defining all of us in the database with more precision.  I think that this is one way to eradicate racism. Our connections are much more complicated than any of us have been thinking.

The more DNA they have to compare, the more specific they can be. When I first took the test the program was new and not well known.  My profile initially told me I was 98% from the British Isles, and trace elements.  I was not very impressed.  As the database grew my profile showed more specificity including western Europe.  Recently my brother sent in his saliva in order to help a man find his birth father.  He has distant DNA links to our family and asked us for some help with his own research.  Male DNA reveals more than female, so my brother complied with his request.  I had heard this before, but when I studied my brother’s DNA results I was surprised to see he had more detail than I did.  We had the same parents for sure.  My partner said it is because my brother is a later model, but this makes no sense. I think it is because he is a male.  I will get to the bottom of this.  In the meantime I have started to investigate some of the 550 DNA matches that Ancestry has compiled for me over the years while I basically ignored this feature.  It is really interesting and fun.  They send me new connections all the time with charts about the lineage.  I am into it, and have made progress on my tree.  I have confirmed some sketchy connections in my research, and found many new ones.  DNA is where it is happening for my investigations right now.  It is yielding progress.  I paid my annual subscription fees this month, but feel really good about all the value I get from Ancestry.com.  The more DNA they collect the better it is for me, so send your spit to my database, please.

DNA testing for the public is a huge growth market.  It is also the talk of the town.  When I ran into my friend who is a doctor and knows she has Swedish ancestry did the test at 123 and Me recently.  She did it because it is possible to test for genetic predisposition to disease as well as for contraindicated medications.  She wanted to know which meds are going to harm her. I did not know that was part of the information being shared, but that does sound incredibly useful.  I need to check back with her to see what she learned beyond what she knows from that old family bible in Swedish that tells part of her story.  Everyone finds surprises.  Have you done any DNA tests yet, gentle reader? What have you discovered?  What made you decide to do it? 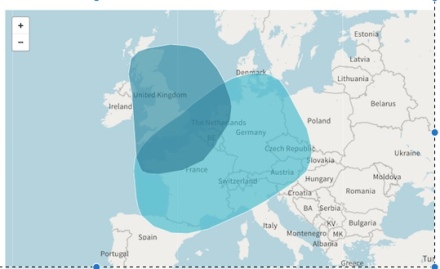 I have studied my ancestry since 2008, and have made much progress. There are several dead ends that seem kind of hopeless. My maternal grandmother was an orphan who was adopted right after the Civil War in Mississippi in a county where the courthouse burned to the ground with all the records. I know who her adopted parents were, and that she had a brother named Fidel who was adopted by the same family.  My paternal 2nd great-grandfather was part of a Swiss/Pennsylvania Dutch family.  I know who his nephew was because I have written notes form my own great-grandmother. I can trace his nephew back to Virginia, and then to Switzerland, but I can find no record of his birth.  I have not found his parents out of all the Petersons scattered all over the Midwest.  I hold a grudge against the state of Indiana for this oversight/problem, because that was the state of his birth.  I desperately want to hook up the data, but can’t find the hard evidence to do so.

The big problem with records of all kinds is that they were created by human beings.  There are errors for all kinds of reasons.  Since all these cases are extremely cold I have no way to verify anything I might find in writing beyond a shadow of a doubt.  I have made errors because of common names like Taylor, Smith and Morse in my tree that can easily be mistaken for  another person with the same last name.  Still, I do learn a lot about the history of the times even when I am proceeding along an erroneous lead.  When I find errors sometimes I can rebuild with accurate data easily, but often I am back to square one without a clue.

I sent my DNA sample to Ancestry.com when the service was first available.  With few folks in the study my DNA was described as 99.9% from the British Isles.  Now the a few years have passed and more comparison DNA has been added I am only 85% from Britain.  I have not paid too much attention to this data, only checking in infrequently.  The impressive part of this data is that I now have 540 4th cousins or closer in the site’s database.  I have started looking at this as a new way to trace the connections because I was recently contacted by an adopted man looking for his birth parents. His closest DNA match is a 2nd cousin of mine.  He and I do not show any match, but male DNA, containing the y chromosome, has more detailed information, as I have recently discovered.  I began to research more about how these tests work and what we can discern from them.  My relative in search of his roots informed me that a match can go back for up to 12 generations.  Finally all my research may be useful to solve this adopted man’s mystery.  He has turned my attention to this fascinating element of genealogy research that I had not really used.  I don’t think I will solve my brick walls (as we call the dead ends in family trees), but it does give me a new way to discover my connections to all my relations.  I am grateful all these 540 people felt curious enough to send in DNA samples for our mutual benefit.  Have you examined your DNA, gentle reader?  Any surprises?