Richard Arden Morse, my father, was born in Independance, Kansas in 1920. His father, Ernie Morse was a jar head, a person who drilled oil wells before the advent of the rotary bit.  They were a natural part of the culture in the Cherokee Strip.  Ernie grew up on the Cherokee Nation and with his grandparents who farmed outside Coffeyville, KS.  When my dad was a kid this part of the world contained the most concentrated  wealth in the world.  Oil was to be found close to the surface.  My father learned fracking from Ernie, who had an 8th grade education. He went to Oklahoma University, Penn State, and later Texas A&M, where he pioneered numerical modeling of oil fields. 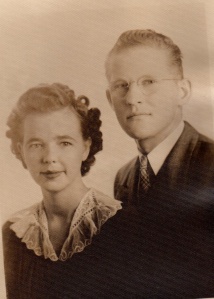 Richard Arden married Ruby Lea Taylor in Houston on Nov 13, 1942.  He was driving a drilling rig truck for Halliburton at the time.  They met at a boarding house where they both lived. They traveled the world together until his death in 2004.  They went everywhere and did everything, well ahead of their time.

My father taught me to be scientific, to dance, sing, play musical instruments, and be a true sophisticate. He taught at Texas A&M at the end of his career, enjoying the international students who came to study in the petroleum graduate school. They had difficult projects during the semester, but he was famous for his “final exams” which were big parties at my parents’  house for all the students.

‘Tis a small world indeed, Pam. My great great grandmother was born into the Cherokee Nation in 1837 at the tail end of the Trail of Tears.

I had my first job in Cherokee, NC at Unto These Hills, and outdoor drama about the Trail of Tears. I was a singer and costumer, age 17. Used to quick change Eagle Dancer into Andrew Jackson each night.

He was a great man – they were an inspiring couple.

What a lovely tribute to your parents , Pam. I remember them well and my parents thought the world of them! They often came to visit mom and dad when they lived in Texas.