My week has been graced by the presence of a real writer. I went to hear the poet Simon Ortiz  who was in Tucson for a reading of his work. I was deeply moved and highly impressed with his writing, which he delivered with lavish explanations about his process. He is now writing an epic poem, an idea he joked about by saying there is no real rule about exactly how long an epic has to be. He will include within the epic some of his older works, which he shared with the group who had come to the U of A Poetry Center to listen to him.  I purchased his book, Sand Creek, which he signed for me after the reading.  I told him how much I loved hearing him and he responded that he really loved reading to us.  His genuine joy in sharing his work was evident.  We were all truly blessed to be there.  Some of his poems are funny, and some carry tragic stories from history, like Sand Creek.

The Poetics and Politics of Water series has evolved.  Dr. Ofelia Zepeda is a poet and professor who collaborates to put together this very special program of Native American writers.  She and her colleague Larry Evers introduced Politics and Poetics in 1992.  I look forward to the next reading which will be given by Dr. Zepeda herself.  She uses her native language from this region, Tohono O’odham, to welcome the visitors to her land and bless the participants.  It is beautiful.  She translates the traditional greeting in to English when she is done. 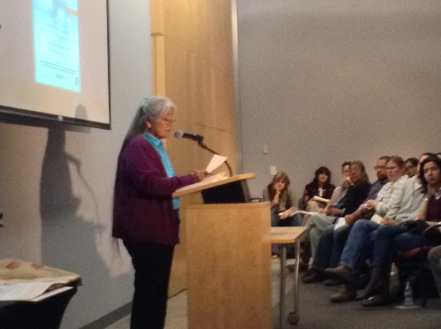 I have written and read some this week with mixed results.  I believe the most profound thing that happened to set my poetic self on the path was my chance to hear Mr Ortiz.  He said prose and poetry are all the same, and in the end, all language is poetry.  He certainly was all poetic in every part of his being. He talked about his own recovery from alcoholism, and his father’s inability to recover from it.  His identity as Acoma with deep religious and cultural heritage is important to him.  His father exposed Simon to sorrow through addiction, but he also taught him his traditional language and mystical history.  The last poem he read to us was about his father’s death.  It was sung as a song, a chant, a rhythmic tribute to the spirit of his father and all he had inherited. It was a wonderful way to show his talent and end on a solemn, serious, meaningful note.

I love getting inspiration from people when they are PA. It gives one real impetus to get things on paper!