Pandora, What is in That Box? 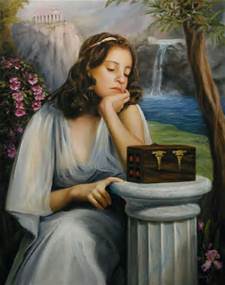 The myth of Pandora is a Greek creation story.  Zeus ordered Hephaestus (blacksmith of the gods) to make the first woman.  He did this using water and earth.  Her name means all gifted because various gods gifted her with talents.  She was married to Epimethius as a major prank.  She was designed to punish disobedient  humans.  She was irresistible.   She arrived with a box which was not to be opened.  We know the part of the story in which she does open the box and evil and suffering escapes.  In fact, evil runs rampant on earth as a result of Pandora’s weakness of curiosity.  She has something in common with Eve, the first woman who just had to try the forbidden fruit in the garden.

When Pandora sees that she has released illness and evil on the earth she attempts to close the box quickly.  In the original story she came with a jar (pithos).  Later translations from the Greek changed the jar to a box.  Either way, she managed to close the container with hope trapped inside.  I feel this myth is pertinent to our world situation today.  The evil, the misery, the illness has been released into our atmosphere. It is swirling all around us everywhere.  Hope is often obscured, as if it is enclosed in some secret vessel. 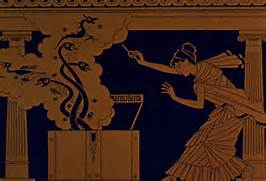 I love this myth and its’ relevance to today (or at any time) because hope and a positive attitude are key to moving forward in life.