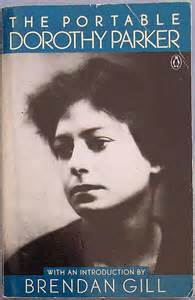 the queen of swords

One of my favorite authors of all time is Dorothy Parker who lived from 1893-1967.  Her career included writing poetry, journalism, drama criticism, and screen writing.  She is best known for her wit and satire.  As a public figure she was both well-loved and controversial.  Her political statements got her listed on the Hollywood black list during the witch hunt for communists.  When she died she bequeathed her estate to Dr. Martin Luther King Jr.  Her stance on civil rights was progressive long before it was socially accepted.  I admire her for the way she used humor.

The Queen of Swords in tarot is a symbol of independent thought and judgement.  She is professional, perceptive, analytical and sharp witted.  She beckons to the future and is looking at it in the card, but we can’t see what she sees.  Her intellect is mature and her discernment and ability to judge impartially make her a royal.  She does not beat around the bush, but comes directly to the point without emotional investments.  She uses logic and facts to make good decisions.  When this card turns up reversed in a reading the shadow elements of the archetype are indicated.  When she is upside down it means her normally clear vision is being clouded by emotions.  Rather than clear and precise independent thought, she is influenced to preserve status quo in relationships. Her goals are compromised by fear of what others think.  Dorothy Parker had a lot of tragedy and failed relationships in her life.  She played both sides of the Queen of Swords, famously doing quite a bit of drinking.  Like her buddies Hemingway and Fitzgerald she spent a great deal of time in bars.  She suffered from alcoholism which consumed her last years. Her work endures.

Here are some of my favorite quotes attributed to this sharp and sassy sword queen:

“That would be a good thing for them to cut on my tombstone: Wherever she went, including here, it was against her better judgment.”

“A little bad taste is like a nice dash of paprika.”

“The first thing I do in the morning is brush my teeth and sharpen my tongue.”

“I think that the direction in which a writer should look is around.” 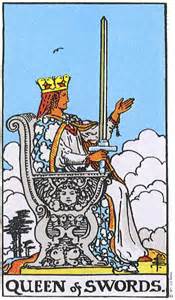