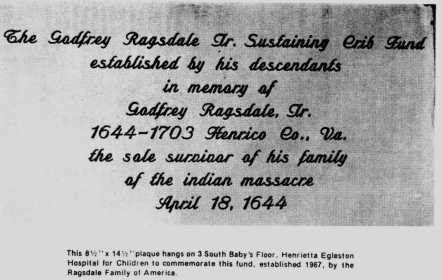 My 8th great-grandfather was born in Virginia Colony in 1643.  His parents were both killed in the Jamestown Massacre when he was an infant.

Godfrey Ragsdale I was the first generation emigrant to America. He came sometime before 1641. He and his wife were killed in an Indian massacre on April 18, 1644. Their baby, Godfrey II, was spared. He evidently came at his own expense with intent to inhabit the land, for no grant has been found to him, but there is a record of a purchase of 300 acres of land by deed from John Butler, 25 Feb 1642. This land lay on the north side of the Appomatox River in Henrico Co. Virginia. Source: “Godfrey Ragsdale From England to Henrico Co. Virginia” by Caroline Nabors Skelton; 1969; and Henrico Co. Records; Bk. 6; p. 21.

The Ragsdale family name is said to come from Ragdale, England, meaning either “valley at the pass” or “dweller in the valley where the lichen grows.” Henry Ragsdale was born in Leicestershire, England about 1450, his son Robert was born about 1485 in Ragsdale, Leicestershire, England. He died about 1559 and some of his children were Henry, Thomas R. and John R. Henry was born about 1510; he married Elizabeth Oglethorpe about 1532 , and their children were William, Dorothy, Elizabeth, Margaret, Owen and Catherine. Henry died in 1559. William was born in 1575; he married a woman named Heathcote, about 1615; they had a son, Godfrey I, who married Lady Mary Cookney and they both came to America.

On April 18, 1644 afterwards known as “Opechancanough Day” the Pamunkee Indians and several tribes in the Indian Federation went on a rampage. There was a carnage that was greater than the one in the Norfolk area in 1622. The Indians slaughtered no less than 500 Englishman. This massacre fell almost entirely upon the frontier Counties at the head of the great rivers, and upon the plantations on the south side of the James River. Both Godfrey I and his wife Lady Mary were killed and scalped.

From documents we know that Godfrey and Lady Mary had a son named Godfrey Ragsdale II, who was born in 1644. Because his mother and father had been killed in the “Jamestown Massacre”, Godfrey II’s next door neighbors raised him and later became his in-laws. Historians say that most Ragsdales in America came from Godfrey II.

Your current genealogy thread is very interesting. Wish they provided more details about his survival

My Gradmother was a decent of Godfrefy Ragsdale her name was Bur Bon Arkasas she was born in 1874 she married Cloumbus Lee Lynn had 3 boys Jhon Boyd Lynn, Robert Ear Smith Lynn ,My father Clayton Howard Lynn, there was 4 daughters Lessie , Vernor ,Louise. Who died as a small child from the fever and Viola Lynn my name is Patricia Ann Lynn but love reading about my ancestor

Thanks, cousin. I am obsessed with the ancestors. So happy to meet you here.

I was researching my 6th great grandfather Godfrey Ragsdale Jr. and found this post. I was thrilled.

I will study your information with great interest and let you know if I find anything else.

My grandmother on my Mother’s side was a Ragsdale and I’ve traced her ancestry to this Godfrey Ragsdale through research on Ancestry.com. This was all very fascinating. That side of the family all from Virginia. I’m very proud to have ancestors from the very early history of America!

I am Rosemary Jackson, great-granddaughter of Sarah Druscilla Ragsdale of Missouri who married James Walker Gallion.

My grandmother, Mattie Inis Ragsdale was their daughter. She married James Walker Gallion.

Thank you. I am spending time on my Virginia ancestry. until now I could not find a single list of those killed in the 1644 massacre. I am a descendant of Godfrey Ragsdale.