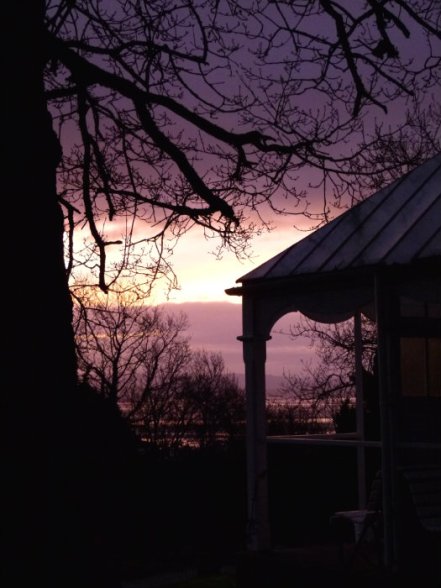 The long trek to the remote village has exhausted the group.  The backpacks grew heavy as they walked for miles in the woods.  They had all come to be part of a writers’ retreat designed to spark creativity.  The accommodations in the country were intended to take the group away from day to day concerns in order to concentrate on writing. Most of them came from big cities and were not accustomed to primitive conditions.  They were told they would need to pump water and carry wood, but this sounded more romantic at the time than it was when they started scouting for fire wood in the wet forrest.  The rain had drenched the woods, so all the wood was too wet to start a fire.  They had no wilderness skills, and were weary and wasted before they even started the weekend. The emotions were tightly wound before they even saw the bunk beds in the attic where they would sleep, dormitory style.

On Saturday morning they awoke to find no staff at the summerhouse.  There was a sign left on the screen door that said, “We have gone to town. Now you go to town.”  This naturally infuriated the writers who had come to be taught some kind of creative trick to unlock their talent. “Go to town?  What the hell does THAT mean?”  Left to their own devices, they scattered into space to figure out what to do.  Sitting under the shade of a large oak tree Emily spotted Eric.  He was wearing a velvet coat, leaning against the trunk of the tree, casually smoking a pipe.  She approached him with caution, but when she clearly saw his handsome face she was instantly smitten by this stranger in the woods.  She wondered why he was so calm, cool, and dressed like a person from a different century. He explained that these woods are haunted with the ghosts of writers who never pushed themselves beyond their limits.  They are the real ghost writers.  They can never be free because they dissed their muse while they were alive.

When Emily awoke back in New England in the 21st century she knew she had just met destiny in a dream.  Her muse, Eric, would be her greatest asset, and it did not matter that nobody else could see him.  He was hers alone.  He faithfully pushed her to work with words every day.  Their tryst was a gift from the creative creator of creation, and would last forever and ever.

To enjoy more interpretations of this photo by other writers, please visit Sue Vincent, who provides these in fleek prompts each week.  Read, comment, or try your hand at fiction here.

Great 👍 loved your story it had an uncanny effect as if quiet eerie and nice matched your picture too. 👌👌👌👌

That’s a novel take on the prompt, Pamela 🙂

Thanks Sue, I am loving the adventure of writing to your prompts…going on a wildflower safari to create some of my own around which to write stories soon.

Oh wonderful, Pamela. I’ll look out for those 🙂

This is brilliant – I loved it. But, note to self, never agree to go on a writers camp to push yourself, I like electric lights and gas fires [smile].

What a unique twist on the prompt and how nice to meet your muse and recognize it.

Thanks Bernadette. I just recently started writing fiction, so this is my first “character”…must be the muse, right?

Great evocative piece full of vivid imagery. Am glad in Eric you found your muse, Pamela.

Brilliant! I thought it was quite dark to start with but then what a fabulous ending. Great post! KL ❤