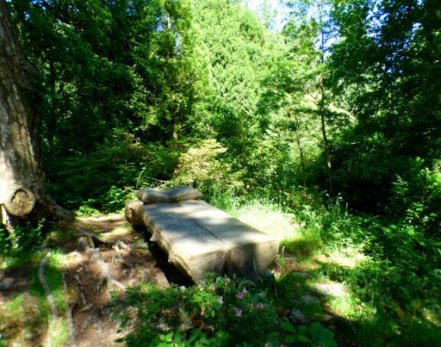 At the most stressful times she could remove herself from the action by calling on her ability to go into a trance. She had been a captive since her early childhood.  She can barely remember her own abduction and the long ride down the mountain out of the forrest.  They crossed barren plains scarred with the remnants of war to the camp where she remained.  She never saw her family again, and was taught a new language, full of harsh sounds and concepts.  In her few hours of rest she remained faithful to her tribe’s values, trying to keep the few sacred words of her mother tongue alive in her  mind. There was no speaking around in that forbidden language, for the camp was used to erase culture and tribal belief. The process was a special kind of stripping of confidence that left them all exhausted.

Her skill to call down the moon was still in tact.  She spent the full moon nights in reverie, practicing the trances and the dances she had been taught as a little girl.  She felt her own power grow as her values changed.  She knew the secret of taking responsibility.  The people brought to the camp were stripped of their identity and culture, then programmed for menial and dehumanizing work.  They were hoodwinked into thinking they had no choices in life, that this awful slavery was a punishment for something they had done.

In her meditation she saw the logs in the forest that her grandmother used for an altar.  She could pull in every detail of that scene, and even hear the voices of her people chanting to bring her back home.  Finally one night in her dream the path to return to her village was revealed.  A strong bold figure opened the gates and brought all the people into freedom.  She ran quickly up the hill with an unlimited energy she had never had.  Her steps were swift and sure as she climbed the last hill.   She saw her whole family gathered around the altar, dancing slowly, chanting sweetly.  When she awoke and found herself safely snuggled in her own hammock she knew she had been taken on a special dream journey.  She ran to her grandmother for an explanation.  All her grandmother would say was, “You have been chosen.  Now you must choose which path you will use.”  She was not sure which one, if any, was real.

This story is a response to the Thursday photo prompt on Sue Vincent’s Echo.  Please join each week for poems and stories on a photo theme. It is fascinating to read the different ways writers interpret the picture.

The dreamer’s path is like that…creating realities as we go, for we are all dreamers…

The blurring of the border between dark and light, dream and real. Wonderful. (K)

The abduction apparently occurred in the dream, but was important nonetheless. This makes the doubt about what is real in the last sentence stand out.

Thanks Frank..I have written little fiction, but am taking a shine to it. I appreciate your opinion here.

Love your photo prompt writing. This one is especially evocative and timely because of the full moon!