If I had to depend on just one vegetable for my entire diet
I would choose one that has both greens and root
The versatile, flavorful, colorful beetroot family is quiet
While deeply reaching down into the earth for loot
The nutrients to produce a truly magical ingredient
For borscht, kvaas, and pickled eggs they are expedient

You can’t beat the beets!

Join other poets, beet and otherwise, for the National Poetry Writing Month. Join the #VeggiePoetry set on twitter, or visit the #NaPoWriMo site to find new poets. The celebration lasts all month in April. 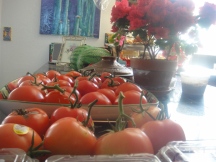 The bunny is no fool who visits my house with loot
He can easily see that we eat salsa of every kind
But shun the chocolate candy, don’t even think it is cute
So he reached into his basket while reading my mind
He left us a batch of perfectly ripe tomatoes, ready to chop
For dessert he left us watermelons, then down the trail he hopped

I wish all the gentle readers a happy Easter Sunday.  May the bunny grant your fondest wishes. Please join poets all over the world in April for #NaPoWriMo.    Read, write, recite all month.

The Holy Ones created all the root vegetables, the ground provisions,
Then scattered them across the earth to feed man and beast
The French got all the radishes, the Russians got the beets
Yams and sweet potatoes grew all over the southern lands
Generously rewarding any farmer who buried them in sand
Ireland had plenty of potatoes, until crop failure let them down
Turnips were pickled in pink brine, prized in Middle Eastern towns
The devil slipped in and made away with the rutabaga on his fork
He took it to the underworld, where his finest vintage he uncorked
I will send you back to the mortals, but with a distinctive smell
There will be no doubt when you are cooked that you have been to hell

He sent them all to Scandinavia, where they are lucky to grow anything to eat

Today’s poem in #NaPoWriMo is dedicated to my erstwhile roommate from South Carolina.  Her parents had a truly awesome garden, and her mom made the best canned tomatoes in the universe.  However, they also grew the evil rutabaga, which she imported to our North Carolina home, and cooked. The first time I smelled it I thought a dog had died in the house.  It left a lasting impression.  When I learned there is such a thing as #VeggiePoetry I knew I had to try at least one during April. Tune in to these and other poems at the #NaPoWriMo site.   Don’t be shy.  Write an ode to a veggie you love…or detest..you may find the #veggiepoet within.