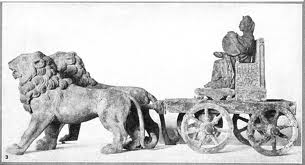 At the Equinox everyone on earth has about the same amout of darkness and light. The sun is close to the equator as it shines for about 12 hours on all parts of the earth for a day. This seasonal shift is of significance to most native cultures. It signals either a lengthening or a shortening of daylight in the months ahead. It creates the conditions for spring planting or fall harvest, depending on the hemisphere in which you live. For a single day, however, we all have the same amount of light and dark in our experience. The literal meaning of the word equinox is equal night. Many calendars begin around the vernal equinox. Romans began the new year on the Ides of March, Astrology uses 21 March as the first of the year, as the Sun moves into Aires. A new year celebration makes sense at this time, as do celebrations to honor rebirth.

The Roman goddess Cybele was associated with rebirth in one of the first Spring break resurrection parties ever held. Romans were all about blood, so they used real bull blood…no chalice of red wine for them. Hilaria was a celebration of resurrection and eternal life held in Rome on the vernal equinox to honor Cybele. She ruled dangerous animals, fertility, and rebirth. She protects civilization. The fact that she is resurrecting her son, Attis, who is also her lover is not a big deal in Roman terms. These things happen in pantheons all the time.  After all was ceremonially  brought safely back to life  Hilaria commenced in a frenzy of joy and mirth.  We do not have any evidence of chocolate bunnies, but they were festive in their own Roman way, with orgies, and chariots drawn by lions, castration, and other stuff they liked. Violets are the flower of the day, since the blood of Attis when he died the first time became the violet we pick in the spring.  Do not hesitate to decorate your eggs with violets if you want to get down Roman style this year.  Unlike our own Virgin Mary, this mother drives a lion chariot, while holding a pineapple, and is on the violent side, so, caveat emptor. 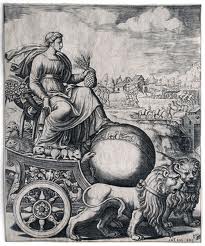 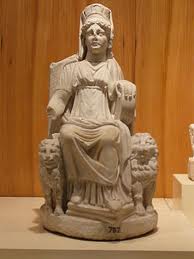 Cybele with her lions

I prefer vernal to autumnal.

I feel equal about them..

I’m SOOOO happy that it doesn’t get dark at 5pm anymore!:-) Does wonders for my mood!

and it will be better every day ..

thanks for this.. love reading this kind of stuff. .but she carries a PINEAPPLE? what’s the significance in a pineapple?

In our world it means hospitality..but I will have to investigate why this crazy mother of the gods has a pineapple in her grip ( texting with a fruit?) I am sure it means something…Chief inspector Morse needs to find out why one holds a pineapple while driving the lion chariot..not your average station wagon mom.