Just when I thought the Federal government had no redeeming qualities I was proven wrong.  My friends and I had the privilege of touring one of the classiest buildings the US taxpayer owns, the US Court of Appeals of the 9th Circuit in San Francisco.  We were invited by my friend, appellate commissioner Peter Shaw , who has worked in the building for many years.  We knew we would see one of the oldest buildings in the city, but none of us was prepared for how cool it actually is.  When it was built it also served as the main post office, so some of the teller windows and details that belonged to the post office era have been included in the design today.  We met very gracious people who were  distinguished and personable to us. The courtrooms are  ornate and full of fine stone carving, wooden furniture, and mosaics.  The metal throughout the building is beautifully formed. Many of the lighting fixtures are brass, shined to perfection.  We truly loved the feeling of being treated to the luxury of the surroundings without being involved in a court case.  The big thrill of the day was dressing in Peter’s robe and sitting for photos on the bench, flanked by the babes of justice.  He had done this before so he knew how popular this would be.  We felt like the luckiest taxpayers in the country.  The commissioner is more than an esteemed member of the court.  He has a pride and sense of history that he was able to convey to us as we examined the evidence he presented.  We all felt much better about our government, if only for an afternoon.  I will always remember this opportunity to peek into the distinguished and artful world of jurisprudence. 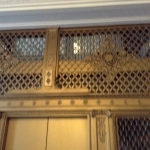 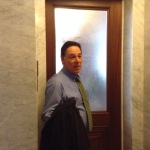 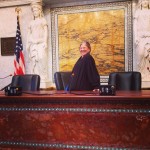 fascinating place. It looks quite dramatic