My 9th great grandmother was the first woman poet to be published in America:

Anne Bradstreet (1612-1672) is one of the most important figures in the history of American Literature. She is considered by many to be the first American poet, and her first collection of poems, “The Tenth Muse Lately Sprung Up in America, By a Gentlewoman of Those Parts”, doesn’t contain any of her best known poems, it was the first book written by a woman to be published in the United States. Mrs. Bradstreet’s work also serves as a document of the struggles of a Puritan wife against the hardships of New England colonial life, and in some way is a testament to plight of the women of the age. Anne’s life was a constant struggle, from her difficult adaptation to the rigors of the new land, to her constant battle with illness.
It is clear to see that Anne’s faith was exemplary, and so was her love for children and her husband, Governor Simon Bradstreet. Anne’s poems were written mainly during the long periods of loneliness while Simon was away on political errands. Anne, who was a well educated woman, also spent much time with her children, reading to them and teaching them as her father had taught her when she was young. While it is rather easy for us to view Puritan ideology in a bad light because of it’s attitude towards women and strict moral code, her indifference to material wealth, her humility and her spirituality, regardless of religion, made her into a positive, inspirational role model for any of us.
Another one of Anne’s most important qualities was her strong intuition, although only subtly hinted at in her work, probably for fear of reprisal from the deeply religious Puritan community, one cannot help but feel her constant fascination with the human mind, and spirit, and inner guidance.
Her style is deceptively simple, yet speaks of a woman of high intelligence and ideals who was very much in love, and had unconditional faith. While it was difficult for women to air their views in the 17th Century, Anne Bradstreet did so with ease, as her rich vocabulary and polyvalent knowledge brought a lyrical, yet logical quality to her work which made it pleasant for anyone to read.

written in her style 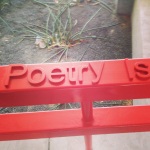 Anne Dudley Bradstreet was protected by her father and husband at a time when women were not supposed to think, let alone write poetry.  She wrote history as she lived it as an Englishwoman in New England.  I visited the University of Arizona Poetry Center this week to see the word shrine for the dead.  I was very happy to also find a big blue book by Anne Bradstreet on the shelves.  I enjoyed the wonderful space and visited with my ancestor by reading her works for about an hour.  I had seen some of the work before, but since I was thinking of ancestry I really enjoyed the note she wrote to her son Simon (brother of my own ancestor).  There is a copy preserved in her own hand, which I love to see.  It gives me some intuition into her soul’s journey.  Being a Pilgrim was not easy, but if your father and husband were governors you had some obvious advantages.

It is a wonderment of synchronicity to find my ancestor’s work preserved at the Poetry Center very near my home where I can go visit and read her any time.

I am glad that there is more to this story. I hit this backwards. from the other post for the U of A altar.. so very impressive!! She is truly a role model!

thats a lovely thing to have as part of your heritage. now I know where your personality comes from!