My 26th great-grandfather is famous for bringing big changes to England. He died from injuries sustained when he fell from his horse in battle.  He became king of England in 1066.  He was too fat to fit into his burial sarcophagus.  His grave was vandalized several times, including during the French Revolution.  Although the memorial remains, almost none of his remains are in the grave. 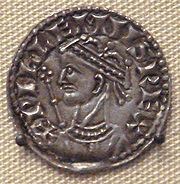 This is interesting. I did not know that William was feared hundreds of years after his death. But I am not surprised the tombstone was set again at the beginning of the 19 century. That was the time of the so called German Romanticism. They idealized the middle age in philosophy, art, poetry and literature.

I am not surprised the grave was vandalized…but English history is so much more visceral than it used to be.

Hey, this is amazing! My son and I learned about William in our study of European history and geography last fall (he’s in first grade). I’ll be sharing this post with him in the morning. For real….you hail from him, eh? Cool beans.

Thanks for visiting. I remember William from the Magna Carta, etc., although most of the other royal types in my tree were not known to me. I have learned a lot about the history of England by this study. It is pretty amazing.

you lost me at theobald II. maybe who they married would help?