My paternal 2nd great-grandmother was born in upstate New York in 1840.  She married Daniel Rowland Morse, also from New York, in Illinois in November, 1858.  She and her parents had moved to Polo, Illinois, which was a stop on the underground railroad.  It seems that Daniel joined them on the journey.  The couple’s first son was born in Illinois.  The young family returned to New York to live from 1860 until 1875. My great grandfather Jason was born during that time.  By 1879 they had moved to Kansas to homestead near the Oklahoma Territory border outside of Coffeyville.  She remained in her home until after her husband died, then she moved next door to her daughter’s home.  She and Daniel are buried in a private cemetery ( her daughter’s family land) near her Kansas home.  I visited the courthouse and read all the probate papers that applied to her estate.  I have some copies of letters and court findings that indicate what many had implied, that my great-grandfather Jason was not very well liked or trusted.  She brought her son down from New York to settle her affairs after she died.  My ancestor was conspicuously absent from the business proceedings of her estate.   It turned out that court judgements against him amounted to more than his share of the inheritance.  Moving to the wild wild west as a teen was perhaps not the best environment for Jason’s upbringing.  My grandfather Ernest ran away from home as a very young man because he and his brother did not like their stepmother or her daughters.  In 1900 Ernest was living on the Cherokee Nation with his new stepmother.   In 1910 Ernest is found living with Sarah and Daniel at their house, working as a farm worker.  Later Ernest became a milkman with a horse drawn delivery cart.  I am sure Sarah had a big part in raising her grandsons.  It was an amazing time in history.  It was not so easy to survive wild west adventures in those days.  I am very lucky that my pioneer ancestors made it.  I did not see the grave when I was in Kansas, but I know where it is for the next visit.  Someone has taken very good care of them. 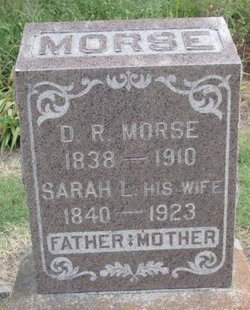 Wow, your grand-father had a tough life. Yes, I guess that the Wild West was not an ideal place to raise children.

I love updates on your family history. This one is pretty wild. The Oklahoma territory was crazy with Indians and rustling, Texas Rangers and cattle ranching….