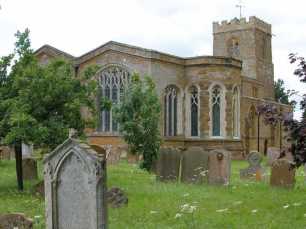 When Lawrence Washington and his twin brother Robert were born in 1568 in Sulgrave, Northamptonshire, England, their father, Robert, was 24, and their mother, Elizabeth, was 21. He married Lady Margaret Butler on August 3, 1588. Lady Margaret was heiress to a wool fortune.  Her father helped Lawrence prosper in the wool trade and become a prominent citizen.  He was mayor of Northhampton from 1532-1545, and acquired a manor house known as Sulgrave.   Lawrence and Margaret has 17 children, 8 sons and 9 daughters.  They married well and created an illustrious lineage, that includes George Washington, the first US president….and me. Lawrence died on December 13, 1616, at the age of 48.  He is buried at St Mary the Virgin with St John Churchyard, Great Brington, Daventry District, Northamptonshire, England  His plot: Grave is below a stone slab in the chancel of the church.

Wow.. that’s a great lineage from the Washington clan in Northamptonshire.