#Writephoto The Hinges Of Hades 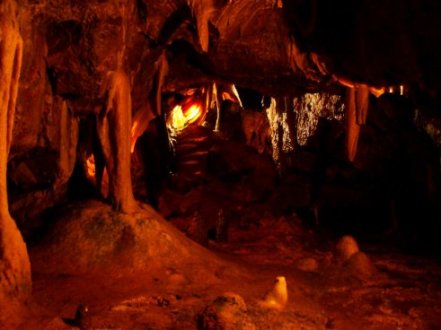 His death was sudden and unexpected, leaving matters in disarray at home, at his business, and with his students.  The mystery school had been meeting in underground caves teaching secrets and rites of magical passage.  Delphina became Fidel’s assistant, a priestess who inherited prophesy and ritual magic from her people, who came from an island with a volcano.  When the volcano erupted few survivors managed to make it to safety.  Delphina and her grandmother were saved by a passing ship.  She was only 3 years old when she arrived in her new land, so she found it easy to adapt to the culture and language.  Her grandmother suffered from nostalgia and yearned for a home Delphina did not remember.

Fidel lived next door and was her friend all through childhood.  Her grandmother was cautiously approving of him, observing his exceptional nature.  After her grandmother died Delphina moved in with Fidel’s family, and eventually married him.  Their work together at the school replaced children and family in their lives.  They dedicated themselves to higher truth and strict observance of their beliefs.  She had grown up within the culture, and never questioned the motives or the fundamental beliefs of the elders.  They always told her she was lucky to be alive, and she agreed.  She did not question the essential mystery she had been taught.  She believed that wealth was the most important and significant reward granted to the faithful.  Her teachings reflected her willingness to do anything to acquire money.  Fidel, whose very name meant faithful, was a son of Lucifer, trained in the art of stealing souls.  He was raised in splendor and glorious excess to impress the rest of the populace.  It never occurred to him that the rest of the inhabitants were there because they had been cursed.  He never suspected their deep resentment of his position.  He never even suspected who he was himself. His whole life was the ultimate betrayal.

While he was carrying out a ritual hypnotism in the inner sanctum of the cave, a group of hooded assassins stabbed him a thousand times with pitchforks.  The shocking news reached Delphina as she descended into the chamber to deliver ritual wine.  The large heavy gate at the top of the stairway slammed behind her, leaving her trapped with her husband’s murderers.  This was the first inkling she had about her true location and her fate.  She read the sign now facing her on the gate.  “Hotter than the hinges of Hades”, was all it said.

This is a response to Sue Vincent’s photo prompt.  Please visit to contribute your own story, read, or comment.  There is a lively and interesting mix of writers who regularly contribute here.  Enjoy!

Not the kind of mystery school I am intimately familiar with 😉

Parable for the times? Enjoyed this, well written.

Thanks Carl..it is kind of now and kind of eternal…. hell

Well “crafted “. Was this “Rosemary’s baby”. Really enjoyed this one

Thanks!! We all got on a devilish wavelength, it seems.