My eleventh great-grandfather, Nicholas Sotherton, was a grocer by trade. He married Agnes, by whom he had six sons and five daughters.

Nicholas was sheriff in 1530 and Mayor in 1539. For twelve years he was a magistrate over which period he amassed a considerable fortune. He owned properties in both the Maddermarket parish (Strangers Hall), Hellesdon and Ludham

The Sothertons moved to the “Strangers Hall” after Thomas Caus. The property is now open to the public who can view Nicholas’s handiwork.. In particular in the 1530s he installed a crown-post roof and a stone-mullioned bay window in the Great Hall. He also had the external stone steps and porch built to give direct access to the hall without passing through the cellars beneath. Sotherton’s merchant’s mark and coat of arms can still be seen on the screen and on the carved roof timbers.
He has also left his merchant’s mark carved on the right-hand side of the oak fireplace beam in the “Sotherton Room.”

The undercroft at Strangers’ Hall is thought to date from the 1320s when Ralph de Middelton owned a house on this site. The undercroft was used to securely store, and possibly display, goods for sale.

The house on this site was seen as a prestigious dwelling and many merchants and mayors made their mark on the building – remodelling and extending it to reflect their wealth and status.

It is thought that the Great Hall was built during the 15th century, when William Barley, a mercer (cloth merchant) lived here.

During the 16th century, the house was owned by Norwich grocer and mayor, Thomas Sotherton and it is as a result of his entrepreneurism that the house eventually became known as Strangers’ Hall.

The first ‘strangers’ were Dutch, Walloon and Flemish refugee weavers who fled the low countries in the 16th century as a result of the persecution of Dutch Calvinists by their Spanish (Catholic) rulers.

Under Elizabeth I, England was a Protestant country and so welcomed the refugees. The asylum seekers first settled in Sandwich, Kent, in 1565. However Thomas Sotherton was keen to encourage these skilled workers to settle in Norwich because their skills in textile weaving made the immigrants of immense economic value. Documents show that some may have lodged at Strangers’ Hall and much of the prosperity of Norfolk after this period can be traced to this influx of refugees.

The Sotherton family made extensive improvements to the house, installing the crown post roof and stone-mullioned bay window. The front door, vaulted porch and steps were added to give direct access to the Great Hall without passing through the cellars. 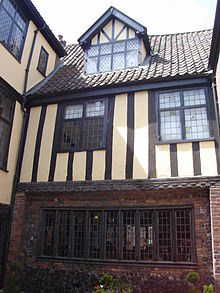 Nicholas died in 1540 and is buried in St John Maddermarket , Agnes survived until 1576. In his will Nicholas directed a priest “honest and well learned to sing for him and to preach the word of God for three years ”

He and Agnes are buried at St. John Baptist’s Church in Madder-Market, where this very fancy monument can be found today: 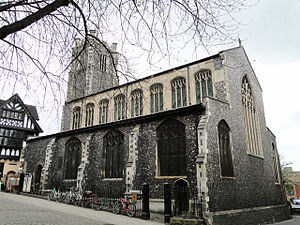 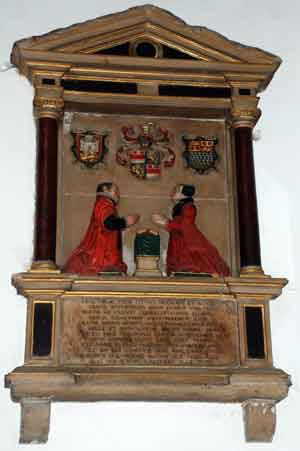 Yes, cousin Rick, Augustine is also my ancestor—-his son. How cool is this museum?

Pamela- Here is one descent from I have from Nicholas. Rick