William Herbert, Earl Of Pembroke, Knight Of The Garter 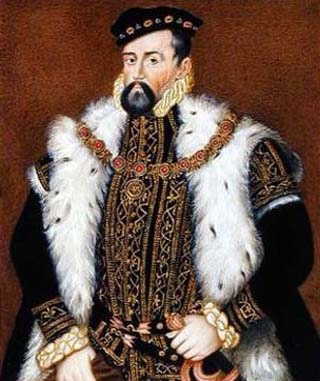 My 18th great-grandfather was mixed up in that War of the Roses business that obsessed the British for so long.  He was beheaded, as several of my other ancestors were, during those tricky Tudor years. HIs castle, Raglan, can still be visited today.

SIR WILLIAM HERBERT, EARL OF PEMBROKE, was elder son of William Herbert of Raglan Castle, called also William ap Thomas, and in Welsh Margoah Glas, or Gumrhi, who fought in France under Henry V, and was made a knight-banneret in 1415. Herbert’s mother was Gladys, daughter and heiress of David Gam, and widow of Sir Robert Vaughan. Sir Richard Herbert of Colebrook was a younger brother. Sir William’s grandfather, Thomas ap Gwillim ap Jenkin (d.1438), secured Raglan Castle on his marriage with Maud, daughter and heiress of Sir John Morley.

The Herbert family claimed descent from ‘Herbertus Camerarius,’ a companion of William I, and his son ‘Henry Thesaurarius,’ both of whom were tenants in capite in Hampshire.1 The descendants of Henry Thesaurarius in the fifteenth-century claimed that he was ‘son natural of King Henry the First,’ and that they were thus connected with ‘the Royal Blood of the Crown of England,’2 but the pretension contradicts established fact. Peter, the great-grandson of Henry Thesaurarius, seems to have been the first of the family to settle in Wales. He received from John in 1210 many grants of land there forfeited by William of Braose, Peter’s descendants by intermarriages with Welsh heiresses acquired very large estates in South-east Wales, and practically became Welshmen.

Herbert was a warrior from his youth. He was knighted by Henry VI in 1449, and in 1450 was on active service in France under the Duke of Somerset. He was taken prisoner at the battle of Formigny in 1450, but was apparently soon released. He played a prominent part on the side of the Yorkists in the Wars of the Roses. In Wales he did very notable service against Jasper Tudor, Earl of Pembroke, Henry, Duke of Exeter, and James, Earl of Wiltshire.

On 1 May 1457 it was reported that the Lancastrians had offered him his life and goods if he would come to Leicester and ask pardon of Henry VI; but the Yorkists were still strong, and he remained faithful to them.3 On Edward IV’s accession Herbert was made a privy councillor (10 March 1461). On 8 May following he was granted the offices of chief justice and chamberlain of South Wales, and some sub-ordinate posts; on 7 Sept. he was made steward of those castles, including that of Brecknock in South Wales, which had belonged to Humphrey, Duke of Buckingham. On 4 Nov. he was created Baron Herbert, and received in consideration of his services the castle, town, and lordship of Pembroke, with numerous manors and castles on the Welsh marches.

On 29 April 1462 he appeared in the House of Lords, and was made a knight of the Garter. Shortly afterwards he joined Edward IV in an expedition to the north of England, where Lancastrians still held out. In 1463 he was appointed justice in Merionetshire, and received new grants of land, including Dunster, and those manors in Devonshire and Suffolk which had been forfeited by Sir James Luttrell. On 3 June 1466 he was in London, and accompanied Edward IV on a visit to the Archbishop of York. In 1467 he was nominated chief justice of North Wales for life, and made constable of Carmarthen and Cardigan castles.

In August 1468 Pembroke and his brother, Sir Richard, advanced against the castle of Harlech, the last Lancastrian stronghold in Wales, where Jasper Tudor, with his young nephew Henry (afterwards Henry VII), still resisted the power of Edward IV. After a siege the castle, although strongly fortified, surrendered, but Sir Richard promised the governor to do what he could to save his life. Sir Richard petitioned Edward IV to that effect, and the request was unwillingly granted. Herbert seems to have taken Prince Henry prisoner, and he was appointed his guardian; but a plan to marry Henry to his daughter Maud failed.

He was advanced to the dignity of Earl of Pembroke (8 Sept. 1468), after the attainder of Jasper Tudor, and received the manor of Haverfordwest and the offices of chief forester of Snowdon and constable of Conway Castle. Soon afterwards the two brothers proceeded to Anglesey to apprehend seven brothers who had been guilty of ‘many mischiefs and murders.’ The mother pleaded strongly with Pembroke to spare the lives of two of her sons. Richard seconded her prayer, but Pembroke refused to yield, and executed all. Whereupon the mother cursed him on her knees, ‘praying God’s mischief might fall to him in the first battle he should make.’4

Meanwhile Pembroke and the Earl of Warwick had quarrelled. Pembroke, it is said, desired to marry his infant son to the daughter of Lord Bonvile, and Warwick opposed the arrangement. Pembroke thenceforth sought to widen the breach which was threatening the king’s relations with Warwick, and as early as 1466 he had captured in Wales a messenger of Queen Margaret of Anjou, with whom he showed that Warwick was intriguing. In January 1467 the disagreement seemed subsiding, and Pembroke and Warwick both attended a meeting of the king’s council.

But in July 1469 a rebellion, which was largely fomented by Warwick, broke out in the north. The rebels declared for Henry VI, and rapidly marched south. Pembroke readily prepared an army of Welshmen to resist their progress. He and his brother were ordered with their army to join at Banbury a strong detachment of archers under the command of Humphrey Stafford, Earl of Devonshire, and to intercept the enemy there. The first part of the manoeuvre was successfully accomplished. But a skirmish between a detachment of Pembroke’s army under Sir Richard and some rebel troops ended in the total rout of the former.

Immediately afterwards Pembroke and Devonshire encamped at Hedgecote, near Banbury. A quarrel between the commanders, however, caused Devonshire to lead his archers away, almost in presence of the enemy. On 26 July Pembroke, with his strength thus seriously impaired, was forced to give battle [Battle of Edgecote]. Panic seized his Welsh followers. He and his brother fought desperately. Sir Richard is said to have twice passed through the ‘battail of his adversaries,’ armed with a poleaxe, and ‘without any mortal wound returned.’But the defeat was decisive, and both brothers were taken prisoners.

Pembroke pleaded for his brother’s life in vain, on the ground of his youth; he declared that he was willing to die. On 27 July he made his will, giving directions for his funeral, making many pious bequests to Tintern Abbey and other religious foundations, and providing almshouses for the relief of six poor men. On 28 July Pembroke and Sir Richard were brought to Northampton and beheaded there. Pembroke was buried in Tintern Abbey, and Sir Richard in Abergavenny Church, where his wife Margaret was also buried.5

Pembroke married Anne, daughter of Sir Walter Devereux, Lord Ferrers of Chartley, and had by her four sons, William, Walter, George, and Philip, and six daughters. By a mistress, Maud, daughter of Adam ap Howell Graunt, he had some illegitimate issue, including Sir Richard Herbert, father of Sir William, first Earl of Pembroke of the second creation (1501?-1570).