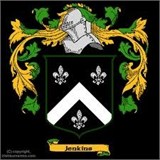 My 10th great grandfather, John Jenkins sailed at age 26 on the “Defence” of London, from London the last of July 1635 and arrived at Boston October 8, 1635 with about 100 other passengers, according to Edward Bostock, master. That is a seriously long voyage.

What is normally found in the search for family history is probate records, documents, bibles, and census records.  Every once in a while you come across a written piece about your ancestor. This one is not designated to a specific publication.  It is unusual because it gives you a picture of his physical presence as well as his philosophy.  I love the Longfellow at the end.

John was a man of about 5 ft. 10 in. in height, slim build and weighing about 155 lbs. His face was widest at the eyebrows and became narrower at the chin.  His forehead was moderately high. He had a long, slender neck. Mentally, he was a conservative. One who took time to think over a plan or proposition before coming to a decision. He had a great, retentive memory and was a Liberal in religion. He was a Liberal when it took raw courage to proclaim it. His voice was pitched higher than the average person and did not carry far.
He was a student in the very limited area of his time and what he read, he understood. This conclusion must be sound because of the very large number of his descendants who have made outstanding records as students and as teachers. And the many who became competant in the legal and medical professions. He must have been very capable and worth while pioneer: one of that class of persons whom Longfellow had in mind when he wrote, “And departing, leave behind us,…Footprints on the sand of time.”