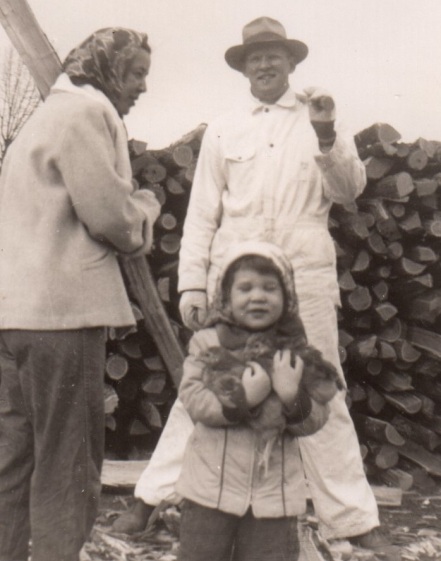 Pam and the Fam on the farm

I study my ancestry and family history. This fascinating subject consumes as much of my time as I allot to it. I have spent six years on Ancestry.com working on my tree. I am more skeptical now than I was in the beginning because I have been burned by specious data.  It is painful to discover an error in one’s research, yet it is better to know sooner than later.  I once had a magical surprise experience in Rhode Island at a very special private family home from the 1600’s.  I was treated to a tour of the home and grounds since I announced that I was a Carr descendent.  I was given instructions to find the family graves by my long-lost “cousin” who still lives on the property.  I was in heaven. It turns out I was also delusional about my connection to that family because I had made a mistake a couple of generations earlier in my research.  I discovered this error after I had returned home from my trip, and had to laugh about it.  I also had to start again to retrace the lineage.  That correction was easy because I had some good documentation to verify the facts.  Other problems I have discovered or had pointed out to me have left me with a dead-end when I removed the phantom limb.

The odd phantom feeling after chopping off  limbs and branches is caused my the attachment formed while studying them.  There are several very common names in my tree including Scott.  When I began my sturdy I started with notes written by my maternal great-grandmother about her knowledge of the family.  She stated that my 2nd great-grandfather, Thomas Scott, was a soldier in the Union army during the Civil War.  Even though we know his full name, Thomas Ewing Scott, born in 1842 in Ohio, I can find no decisive record of his military service.  There are too many Thomas Scotts from Ohio for me to be sure.  My maternal 2nd great-grandfather was, indeed, a soldier for the Confederacy.  I am positive about that because I have a copy of his service record as well as his Confederate pension application that he made late in his life in Texas. After his death his wife also applied for a pension as a surviving spouse.  I have her application documenting her husband’s service also.

If you find written documents of a private source they may or may not be accurate.  Only when you can back up your story with official documents do you have a solid case.  I have learned the hard way to verify all the connections fully before jumping back to another generation.  There are many  trees on the Ancestry.com site that have unverified connections.  Copying the work of others without making sure of it can lead to bigger and longer errors.  This is not even as safe as the cold war when we trusted by verified.  Don’t trust until you verify.  This practice may save you many hours of wasted time.  After I have recovered from the vexation of discovering I had been wrong I still had certain affection for those people who turned out not to be related to me.  My philosophy now is that I  learned about history while I was out on the wrong limbs, and I have never claimed to be a professional genealogist.  I am more of a time traveller.  Do you know any of your family history, gentle reader?  How did you learn about it?

Cousin Pamela- very nice photo. looks like you are holding chickens? very cute indeed. I have returned to my Evans line after many years, and found a different wife for my 4th great grandfather. Just came in out of the blue. There are tombstone photos that seem to confirm her. Also, she “fits” much more that the previous candidates. Geni seems to acknowledge her but that may be fed by family. It is not a copy of past conclusions anyway. Still, I wonder and keep re-checking the link. In the end, genealogy does not seem to be an exact science. My best. Rick

I have met some real pros in a couple of New England groups on FB…very impressive. I have helped a couple of friends, but would not make a good pro genealogist….it takes infinite patience. It is fun to do it when I want.

My grandmother has documentation of her family since the 1800’s and knows by heart the whole stories of her side of the family and my grandfathers, and I am absolutely fascinated by it all!! I actually started to find the place where my great grandfather was born and I’ve been very close. When manfriend asked me how that felt I told him since I was a little girl I never felt like I was a nobody, I never felt not important out irrelevant because that history told me where I came from and those before me created a path, they did things, some where important and some where ordinary but all that was instilled in me; and that helped me know where I was going.
Loved this post ! And thanks for the follow 🙂

What a lucky break to have a grandmother with all that information..treasure!!! I learn from them and enter the realities in which they lived, a total blast. Thank you for the follow, too.

She is indeed! Shame she doesn’t like to be recorded – I would’ve camera-stalked her! (She’s 90, so I don’t mess with it, though I’ve been able to record audio of some of her narratives.)
No problem, loved your blog 🙂 I like to tweet good posts, btw, are you on twitter?

@spafloating. You will be glad you did those audio recordings. I wish I had done that.

It makes sense to look for corroborating evidence. When you have gone back so many generations, it is easy to understand why there could be errors in your research or errors in the data. I suppose, in the excitement to find new “limbs” it is easy to get caught up in the momentum.

Exactly, Marc, especially easy if many others have chosen to believe the same story. Cold cases are very tricky.

Pamela, Can really identify your situation. Family stories usually contain a ‘nugget of truth’, but are not always factual.
I have harbored beliefs handed down generationally only to find that they were marginally true, through Ancestry.com.
This based on 20 years of pencil & paper research before computer info for the last 20 years. I appreciate your wanting to not just copy and paste, but to attempt to prove your research. The info today is amazing.

The plethora of information makes it more important to use discretion. Thanks lot for your visit Christiane.

I followed one family for 3 generations before realizing they were the family of the 2nd spouse of one of my ancestor’s spouse. and not related at all. I solved that by marking direct and collateral lines as well as unrelated families. I also had a death date for one fellow with a very unique name, only to find the death date was for another man with the same unique name. This article is great advice.

It does sting when you find out you have been duped..probably by your own eager devices…Thanks for your visit.

There is a Stammbaum (family tree) for my mother’s father’s family going back (with increasing sketchiness to 1342 (or thereabouts). There is little to nothing on my father’s side. I went looking through microfilm/fiche for my father’s records and could not find him, even though I had the right years and counties, etc. I did find his three siblings though. Then, shortly before my mother passed, she told my brother that my father might have had a different biological father than the man we called “Pappap” all these years. Have not been able to confirm that one.

We convinced my cousin’s dad to have his DNA tested by the Morse Society. The results stated that there was a non Morse father someplace along the line…this was very upsetting to the Lutheran cousins, but did not really surprise me.

This is interesting. This post is encouraging me to check out my own family tree; I don’t really know my ancestors.

I don’t really know much of my family history. Just what I have from my Grandma on my mother’s side (pictures of HER mother and father and of my Grandad’s family). On my Dad’s side it’s a lot easier because we are part of a Scottish Clan. I can go to Duart Castle and see pictures of the Great Aunts I stayed with as a child on the wall. And, of their own families.

You could probably make quick headway since they are in the same nation…You probably have lots of castles.