4th Earl of Hereford. Born the son of Humphrey de Bohun, 3rd Earl of Hereford and Maud de Fiennes at Pleshy Castle in Essex. In November 1302 he married King Edward I’s daughter, Elizabeth Plantagenet, with whom he had at least eleven children. He held the office of Lord High Constable. He took part in the king’s Scottish campaigns in the early 1300s. After the flight of Robert Bruce, de Bohun received many of Bruce’s confiscated properties. At the battle of Bannockburn in 1314, he charged the Bruce, and his nephew Henry de Bohun was killed, but he was taken and held for ransom. He was eventually exchanged for Bruce’s wife and daughter. He numbered among the peers who opposed Edward II’s excesses and banished the royal favorite, Piers Gaveston. In 1316 he successfully led the suppression of the revolt of Llywelyn Bren. By 1322, however, he fell in with Lancaster’s rebellion against Edward II, and as the rebels approached Boroughbridge in Yorkshire, de Bohun led an attempt to storm the bridge held by royal pike men. The Earl, however, was run through by pike men secreted beneath the bridge and died in the field, his gruesome death breaking the advance, and spelling failure for the rebels. (bio by: Iola)

Humphrey de Bohun,Earl of Hereford, Earl of Essex, and Lord HighConstable. In the 30th Edward I[1302-3], this nobleman gave and granted unto the king, by a formal conversance, the inheritances of al his landsand lordships, as also of his earldoms of Hereford and Essex, and the constableship of England, which, upon his marriage with Elizabeth Plantagenet, widow of John, Earl of Holland, and dau. of the king, were regranted to him and entailed upon his issue lawfully begotten by thatlady; in default thereof, and from and after the death of himself and wife, then the lordship of Plessets and certain other lordships in Essexand elsewhere, together with the constableship, should remain wholly tothe king and his heirs forever.

In the 34th of the same reign he had a grant similarly entailed of the whole territory of Annandale, in Scotland. After this his lordship was in the wars of Scotland and was taken prisoner in the 7th Edward II(1313-14), at the disastrous battle (to the English) of Stryvelin. But he was exchanged for the wife of Robert Bruce, who had long been captive in England. From this period we find him constantly engaged in the service of the crown until the14th year of the king’s reign [1321-22], when Edward learning that the earl was raising forces in the marches of Wales against Hugh de Spencer the younger, sent him a peremptory command to forbear, which his lordship not only refused obeying but forthwith joined Thomas,Earl of Lancaster, in the great insurrection then incited by that nobleman for the redress of certain grievances and the banishment of the Spencers.In his proceeding, however, he eventually lost his life, being run through the body by a soldier at the battle of Boroughbridge, in Yorkshire, where his party received so signal a defeat on 16 March, 1321.
The earl had issue five surviving sons and two surviving daus., viz.,John, Humphrey, Edward, William, Humphrey, Alianore, and Margaret. The earl was s. by his eldest son, Sir John de Bohun, K.B. [Sir Bernard Burke, Dormant and Extinct Peerages, Burke’s Peerage, London, 1883, p.57, Bohun, Earls of Hereford, Earls of Essex, Earls of Northampton, and High Constables of England] 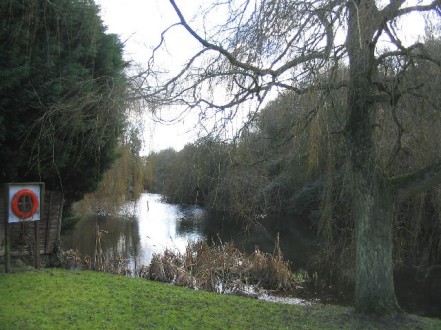 21st century
The moat, all that remains of Pleshey Castle

That is quite an amazing and adventurous history of Humphrey de Bohun VIII. Wow.