I am a big fan of both Schmutzli and his Austrian cousin, Krampus. These characters are Christmas symbols that teach children the value of obedience to parents.  They appear on 6 December, St Nicholas Day, to deliver small gifts like oranges and nuts.  They also scare the devil out of all the kids by giving each one an accurate description of their discipline problems.  The list of behavior to correct is provided by the parents ahead of time.  In the past the home visit might include placing the child in a bag to kidnap him for infractions on the list.  My Swiss friends had this happen in their youth, and reported that it was truly scary. Santa gets drunk as he travels from home to home because he is offered some spirits along the way.  One of my friends was at the end of the route in her small village.  She said Santa was always drunk by the time he came to her house, and she was always afraid of him.

How does this differ from our department store Santa that asks kids what they want? Well, first of all, they only ask the parents what they want out of the situation. The threat of Schmutzli’s terror is intended to root out all that bad behavior before 25 December.  On Christmas Eve the baby Jesus is supposed to fly through the child’s window and leave gifts.  Baby Jesus gets through all the windows just like our Santa gets down all the chimneys, no questions asked. Kids who reform themselves in those 24 days they have to redeem themselves will be rewarded by Jesus.

I think it is a practical system. Now that Schmutzli has been calmed down for modern times, he just represents winter.  In Austria I don’t think Krampus will ever be diluted.  He is more adored than St Nick.  He is still a horned pagan kind of archetype.  He jumps out at you on the street in Vienna to scare you just for fun.  Have you met either one of these guys? 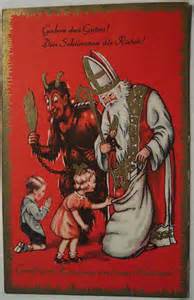 I’ve heard of Krampus, but not Schmutzli. The Dutch have Zwarte Piet (Black Peter) that covers the same function…

Yes, I have heard of Black Peter..I think they all were they same dude in the beginning. Thanks for visiting,John.

I had heard of Krampus but never Schmutzli… I would never do scaring the hell out of a kid by putting a bag over his head. #traumatic..