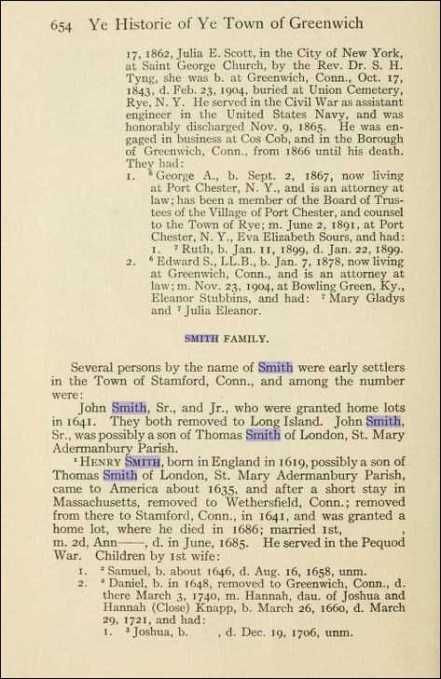 My tenth great-grandfather, Henry Smith, was born in 1619 in St. Mary-Adermanbury, in London,England.  He died  5 Jul 1687 in Stamford,Fairfield,CT.  He was a minister. While no proof positive exists for the name of his first wife, circumstantially it is quite possible that she is Ann Jackson, who came to America [of record 27 Jul 1635] on the ship “Princess”, along with (a) Henry Smith; he age 22; she age 23. The age of 22 for Henry Smith of the ship “Princess” equates to a birth year of about 1613, the probable birth year of Henry Smith in this writing. In the absence of a verifiable source for this theory, Ann Jackson is placed in this writing, but with question. I am descended from his second wife, Hannah:

Rev. Henry Smith arrived in Charlestown, MA from England in 1636 (according to Savage). By 1648 he was in Wethersfield, CT. with his second wife and children from his first marriage. Henry was described as a gentleman from a good family. He was the patriarch of what was considered one of the best sustained and accomplished families in New Engalnd.
He was the first recorded minister in Wethersfield, but his ministry was not a happy one. Mr. Clement Chaplin, a Ruling Elder of the church was a man of wealth, prominent and influencial with a majority of the congregation. For many years he involved Henry Smith in difficulities to the point the conflict wa before the General Court. After a long examination of the merits of the case, in 1643 Mr. Chaplin was fined 11 pounds for libeling Henry. But Mr. Chaplin continued to harrass Henry with carious civil suits until again it came before the General Court. Henry was again exonerated and vindicated by the court. Although the conflict did not completely end, there was no further serious issues. However it is believed the the strain of the trails and harrassment brought Henry to an early grave in 1648.

Wow.. Another great addition (and edition) to your family tree!