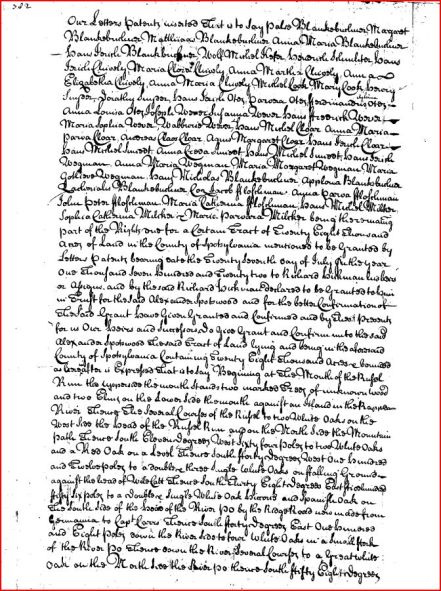 My seventh great-grandfather came to Virginia in 1717 with a group of Lutheran immigrants.  Their unscrupulous ship captain not only landed at the wrong port, but sold them into indentured servitude. Captain Andrew Tarbett had spent the passage given him by the Germans, then took them to Virginia rather than their promised destination, Pennsylvania. He sold them to Lt.Governor Alexander Spotswood.

Lieutenant Governor Alexander Spotswood’s lawsuits against his indentured servants. From 1723 through 1726, Spotswood claimed that several Germans had failed to carry out the terms of their “contract” with him. My ancestor was sued in 1924.  He proved his importation in 1926 with his wife on the ship Scott.  He patented land on June 24, 1926.

These emigrants left their villages in southern Germany (Baden and Württemberg) about 12 Jul 1717 enroute for Pennsylvania by way of London. Starvation took the lives of several of the passengers (probably 50 people perished, most of them children) who had been swindled by their captain who was retained in London. The ship held about 138 passengers and did not land in Pennsylvania but to Virginia where the passengers were sold as indentured servants to Governor Spotswood.

Research by Zimmerman & Cerny has shown that several who were thought to have come to Virginia in 1719-1720 were actually more likely part of the 1717 group. The strongest evidence for this is the absence of any references to each of these families in Germany after 1716 and the fact that they would have left from others from the same town at that time.

Note: Hans is short for Johannes which is John in English
Below research provided courtesy of Tom Bowen:
“From “Before Germanna,” by Johni Cerni and Gary J. Zimmerman, No. 5,
January 1990, The Ancestry of the Sheible, Peck, Milker Smith and Holt Families:
“The Evangelical Lutheran minister [for Gemmingen, Baden] began a new set of parish registers in 1693, and the marriage entries of the Schmidt brothers are recorded therein:
married 21 January 1710 Hanns Michael Schmid, son of Michael Schmid, deceased, court official here, step-son of Alt [Old]
Hans Hecker, to Anna Margaretha, daughter of deceased Josoph Sauter, deceased courth official here.”

On 12 July 1717 the minister at Gemmingen listed in the parish death register the “parents, together with their children, [who] expect to move away from here, wanting to take ship to Pennsylvania, and there in the hardship of the wilderness better their piece of bread than they could here.” Included were:
Hans Michael Schmidt, age 28
wife Anna Margaretha, same age,
son Hans Michael, age 5 1/2
son Christopher, age 1/2
his in-laws.
Also listed was Matthäus Schmidt, age 25/30, wife Regina Catherina, same age, son Matthäus, age 3 1/2 and daughter Anna Margaretha, age 1/2.

They arrived in Virginia near Germanna in then Essex Co., now Culpeper Co., in late 1717 or early 1718 according to today’s calendar, being members of the so-called second Germanna Colony of 1717. The colony moved about 25 miles west to the Robinson River area of Spotsylvania Co. in 1725. This area became Orange Co. in 1734, Culpeper Co. in 1748, and Madison Co. in 1793.”

We have a copy of his will:

In the name of God Amen, I John Michael Smith of the Parish of Brumfield in Culpeper County being old weak & helpless, but thanks be unto God of perfect Mind and Memory, & calling unto Mind the Mortality of my Body & knowing it is appointed for all men once to die, do make & ordain this my last will and Testament. That is to say principally & first of all I give & recommend my Soul into the Hands of Almighty God that gave it, & my Body I recommend to the Earth to be buried in decent Christian Burial nothing doubting that at the General Resurrection I shall receive the same again, by the mighty Power of God. and as touching such worldly Estate wherewith it hath pleased God to bless me in this Life, I do give demise & dispose of the same in the following manner & form, viz.
I do give bequeath & make over unto my dearly beloved only Son John Michael Smith Junior & his heirs forever all my Estate personal as well as real, that he may take the sole & full Possession of it, & all the Lands Goods & Chattels forever after my decease, reserving unto me only the Claim to my Estate as long as I live, & thereby I do revoke & disannull all Wills made before by me & I do acknowledge to be this my last Will & Testament never to be revoked

Signed Sealed & delivered Witness my Hand & Seal
in the presence of us
in the year of our Lord God Michael Schmid?
1760. 25th of February (signed in German)
Adam (AY) Jager,
Henry Ayler
At Court held for the County of Culpeper on Thursday the 19th day of February 1761 This last Will and Testament of John Michael Smith decd was exhibited to the Court by John Michael Smith his only son & heir and the Executor therein named and was proved by the oaths of Adam Yeager & Henry Aylor Witnesses thereto and ordered to be recorded and on the motion of the said Executor Certificate is granted him for obtaining a Probate thereof he giving Bond & Security according to Law and also took the oath of an Executor.

wow, that is so interesting –

Your grandfather must have been extremely well-educated to have some beautiful handwriting.. The events are terrible….. wow.