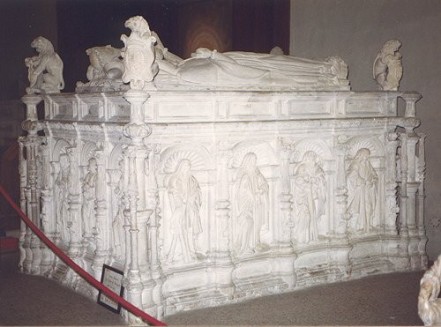 Tomb of Thomas Howard – 3rd Duke of Norfolk St. Michael’s Church; Suffolk,England Thomas Howard was buried here after his death on Aug. 25, 1554. It is possibly the best preserved ornate stonework in Europe. Although both Thomas and his wife, Elizabeth Stafford appear on the same monument, only he is buried there. She was interred in the Howard Chapel in St. Mary’s Church, Lambeth. This was due to the unhappy marriage and final separation.

Thomas Howard, 3rd Duke of Norfolk (1473 – 25 August 1554) was a prominent Tudor politician. He was uncle to two of the wives of Henry VIII, Anne Boleyn and Catherine Howard, and played a major role in the machinations behind these relationships. After falling from favor he was imprisoned in the Tower of London with his dukedom forfeit, and was released on the accession of Mary I. He aided in securing Mary’s throne, setting the stage for alienation between his Catholic family and the Protestant royal line that would be continued by Elizabeth I.

As with all the Dukes of Norfolk, Thomas Howard was descended from Edward I. He was the son of Thomas Howard, 2nd Duke of Norfolk, and Elizabeth Tilney. Thomas Howard succeeded his younger brother Edward as Lord High Admiral in 1513. Until 1524 he was styled Earl of Surrey.

Norfolk first married Anne of York, daughter of Edward IV of England and Elizabeth Woodville on 4 February 1494 at Greenwich Palace. The couple had at least two children: Thomas Howard (c. 1496-1508) and a stillborn child (c. 1499). There are also suggestions of short-lived Henry Howard and William Howard resulting from this marriage.
Following Anne’s death in 1511 he married Elizabeth Stafford, daughter of Edward Stafford, 3rd Duke of Buckingham and Alianore Percy on 8 January 1512. They had three children: Lady Mary Howard (c. 1513-1555) who married Henry Fitzroy, illegitimate son of Henry VIII; Henry Howard (1517-1547) was one of the founders of Renaissance poetry; and Thomas Howard (c.1520-1582). The marriage with Elizabeth was unhappy. When Elizabeth complained about his mistress, Bess Holland, the Duke beat her. The couple remained estranged until Norfolk’s death.

On his father’s death in 1524 he inherited the dukedom of Norfolk and was named Lord High Treasurer and Earl Marshal, making Howard one of the most premier nobles in the kingdom. He distinguished himself many times in battle, and was an able soldier. His power increased somewhat after his niece Anne Boleyn became Henry VIII’s mistress, sometime around 1527. However, their relationship was fraught with difficulty since Anne found her uncle to be selfish and untrustworthy. Although they were political allies throughout the late 1520s alongside Howard’s brother-in-law Thomas Boleyn, Anne’s father, Norfolk once complained that Anne used words to him “that one would not use to a dog.” She was crowned queen in 1533, and was probably influential along with Queen Anne in securing the marriage of Norfolk’s daughter Mary to Henry Fitzroy.

Queen Anne’s religious and political vision was more radical than Norfolk’s, and their relationship deteriorated throughout 1535 and 1536 as Henry VIII became increasingly unfaithful, including with Anne’s cousin, Mary Shelton. Putting his own security before family loyalties, he presided over Queen Anne’s trial in 1536, giving a death sentence despite her probable innocence. The next day, he condemned to death his nephew, Anne’s brother George for the crime of incest with his own sister, the Queen.
After the death of Jane Seymour he used another of his nieces, the teenaged Catherine Howard to strengthen his power at court by orchestrating an affair between her and the 48 year-old king. He used Henry’s subsequent marriage to Catherine as an opportunity to dispose of his long-term enemy Thomas Cromwell, who was beheaded in 1540. Queen Catherine’s reign was a short one, however, since Thomas Cranmer, the Archbishop of Canterbury, discovered that she was already secretly betrothed before her marriage to Henry and had been extremely indiscreet since. Catherine was beheaded in February 1542, and numerous other Howards were imprisoned in the Tower – including the duke’s stepmother, brother, two sisters-in-law and numerous servants.

Catherine Howard’s execution was his downfall, despite Norfolk’s desperate efforts to heal the rift. He had become the leader of the premier family in England; as the uncle of Anne Boleyn and Catherine Howard, and the great-uncle of Jane Seymour[1] He had also benefited from the influence of several of the King’s mistresses, his nieces Mary Boleyn and Elizabeth Carew and his wife’s aunt, Anne Stafford, Countess of Huntingdon. In 1546, Norfolk allegedly hatched a plot to make his daughter, Mary Howard, the King’s mistress, even though she was the widow of Henry’s illegitimate son.[2] In December 1546, he was arrested in company with his son Henry and charged with treason. Henry VIII died the day before the execution was due to take place, and Norfolk’s sentence was commuted to imprisonment. The Earl of Surrey was less fortunate and had been executed a few days previously.
Norfolk remained in the Tower throughout the reign of Edward VI of England and his dukedom remained forfeit. He was released by Mary I in 1553, due to the Howards being an important Catholic family, and the dukedom was restored. The Duke showed his gratitude by leading the forces sent to put down the rebellion of Thomas Wyatt, who had protested against the Queen’s forthcoming marriage to Philip II of Spain and had planned to put Anne Boleyn’s daughter, the future Elizabeth I on the throne in Mary’s place. The result of Norfolk’s suppression of the Wyatt Rebellion was Princess Elizabeth’s imprisonment in the Tower (although there was not enough evidence to convict her on treason, since she clearly had not been party to the rebels’ precise intentions) and the execution of the Queen’s cousin Lady Jane Grey. Norfolk died not long after the Wyatt Rebellion and was succeeded by his grandson Thomas. The 4th Duke, also a Catholic, was executed on Elizabeth’s orders for illegally plotting to marry Mary Queen of Scots.

Thomas Howard’s tomb is situated in Framlingham Church, Suffolk. It is among the best preserved example of ornate stonework in Europe

My 15th great-grandfather, Thomas Howard, 3rd Duke of Norfolk, KG (1473 – 25 August 1554)  aided Mary in securing her throne, which ended him and his family  in a world of trouble. He was fully immersed in the politics of Henry VIII, and paid the price for it.  Those were treacherous times to be close to the king. 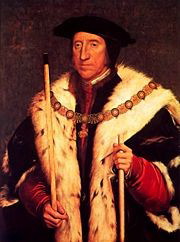 Oh, you found another of your famous ancestres. Very interesting story. I already thought you had given up on your family tree.

You can never give up, Brigitte, until you get to Adam and Eve

I remember learning about Thomas Howard. I thought I knew who he was by his burial monument. (surprised I really remembered correctly).
He was a ruthless man…..

The duke was a cruel dude. He is often featured in dramas about the Tudors, and he is always portrayed as creepy.