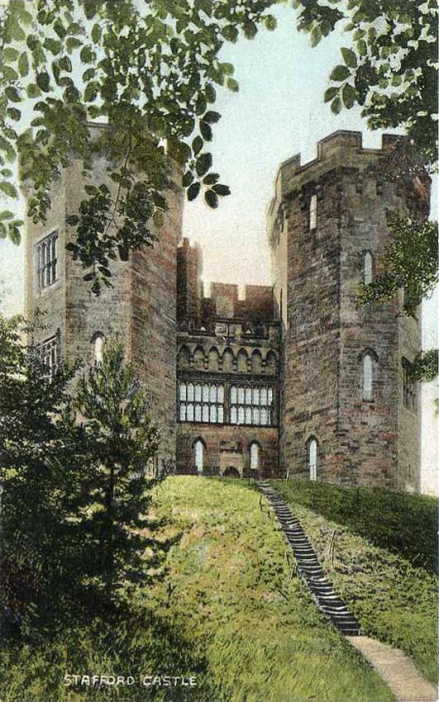 Humphrey married Margaret Beaufort, daughter of Edmund Beaufort, 2nd Duke of Somerset and Eleanor Beauchamp. Her maternal grandparents were Richard de Beauchamp, 13th Earl of Warwick and his first wife, Elizabeth Beauchamp, 4th Baroness Lisle. She was also a first cousin to Anne Neville, 16th Countess of Warwick and through her cousin-by-marriage to Richard Neville, 16th Earl of Warwick, the so-called “Kingmaker” during the Wars of the Roses. Humphrey and Margaret had a single son Henry Stafford, 2nd Duke of Buckingham (4 September 1455 – 2 November 1483).

Humphrey fought under his father-in-law in support of the House of Lancaster during the First Battle of St Albans. He appears to have been badly wounded at this battle but actually survived for a least another 2–3 years. This may account for his disappearance from the contemporary records of the time. In 1458 he died from the plague.

The First Battle of St Albans, fought on 22 May 1455 at St Albans, 22 miles (35 km) north of London, traditionally marks the beginning of the Wars of the Roses. Richard, Duke of York and his ally, Richard Neville, Earl of Warwick, defeated the Lancastrians under Edmund, Duke of Somerset, who was killed. York also captured Henry VI, who appointed him Constable of England.

The Lancastrian army of 2,000 troops arrived at St Albans first, and proceeded to defend it by placing troops along the Tonman Ditch and at the bars in Sopwell Lane and Shropshire Lane. The 3,000-strong Yorkist army arrived and camped in Keyfield to the east. Lengthy negotiations ensued with heralds moving back and forth between the rival commanders. After several hours, Richard, despairing of a peaceful solution, decided to attack. The bulk of Henry’s forces were surprised by the speed of Richard’s attack; most of the army was expecting a peaceful resolution similar to the one at Blackheath in 1452. However, two frontal assaults down the narrow streets against the barricades made no headway and resulted in heavy casualties for the Yorkists.
Warwick took his reserve troops through an unguarded part of the town’s defences, through back lanes and gardens. Suddenly the Earl appeared in the Market Square where the main body of Henry’s troops were talking and resting. There is evidence they were not yet expecting to be involved in the fighting, as many were not even wearing their helmets. Warwick charged instantly with his force, routing the Lancastrians and killing the Duke of Somerset.
On the Earl’s orders, his archers then shot at the men around the King, killing several and injuring the King and the Duke of Buckingham. The Lancastrians manning the barricades realised the Yorkists had ouflanked them, and fearing an attack from behind abandoned their positions and fled the town.
The First Battle of St Albans was relatively minor in military terms, but politically was a complete victory for York and Warwick: York had captured the King and restored himself to complete power, while his rival Somerset and Warwick’s arch-enemies Henry Percy, 2nd Earl of Northumberland, and Lord de Clifford both fell during the rout.

Humphrey actually died of the plague, not of wounds after The Battle of St. Albans. He was apprently badly wounded there, but survived.

.
His maternal grandparents were Ralph de Neville, 1st Earl of Westmorland and Joan Beaufort, Countess of Westmorland.  His maternal uncles included (among others) Richard Neville, 5th Earl of Salisbury (father ofWarwick, the Kingmaker), Robert Neville who was first Bishop of Salisbury and then Bishop of Durham, William Neville, 1st Earl of Kent and Edward Nevill, 3rd Baron Bergavenny. His most prominent maternal aunt was Cecily Neville, wife of Richard Plantagenet, 3rd Duke of York and mother to among others Edward IV of England, Edmund, Earl of Rutland, George Plantagenet, 1st Duke of Clarence and Richard III of England.

Lord Stafford fought under his father-in-law in support of the House of Lancaster during the First Battle of St Albans. He appears to have been badly wounded at this battle, but either eventually died of his wounds or from the plague, predeceasing his own father in 1458.

Stafford married Lady Margaret Beaufort, daughter of Edmund Beaufort, 2nd Duke of Somerset and Lady Eleanor Beauchamp. Her maternal grandparents were Richard de Beauchamp, 13th Earl of Warwick and his first wife Elizabeth Berkeley. By her father, she was a niece of Joan Beaufort, Queen of Scots and a cousin to Lady Margaret Beaufort (mother of King Henry VII). By her mother, Lady Margaret was a niece of Anne de Beauchamp, 16th Countess of Warwick and as such, a cousin to Isabel, Duchess of Clarence and queen consort Anne Neville.

Lord and Lady Stafford had a single son, Henry (4 September 1455 – 2 November 1483). Henry was styled Earl of Stafford on his father’s death, and succeeded his paternal grandfather as Duke of Buckingham in June 1473, following the latter’s death at the Battle of Northampton on 10 July 1460.

hi. Humphrey and Margaret also had another son Humphrey who appears to have died young. He was knighted as a very young boy at the same time as his brother Henry after being taken on as a ward of the Queen, Elizabeth Woodville. He then falls out of the records.